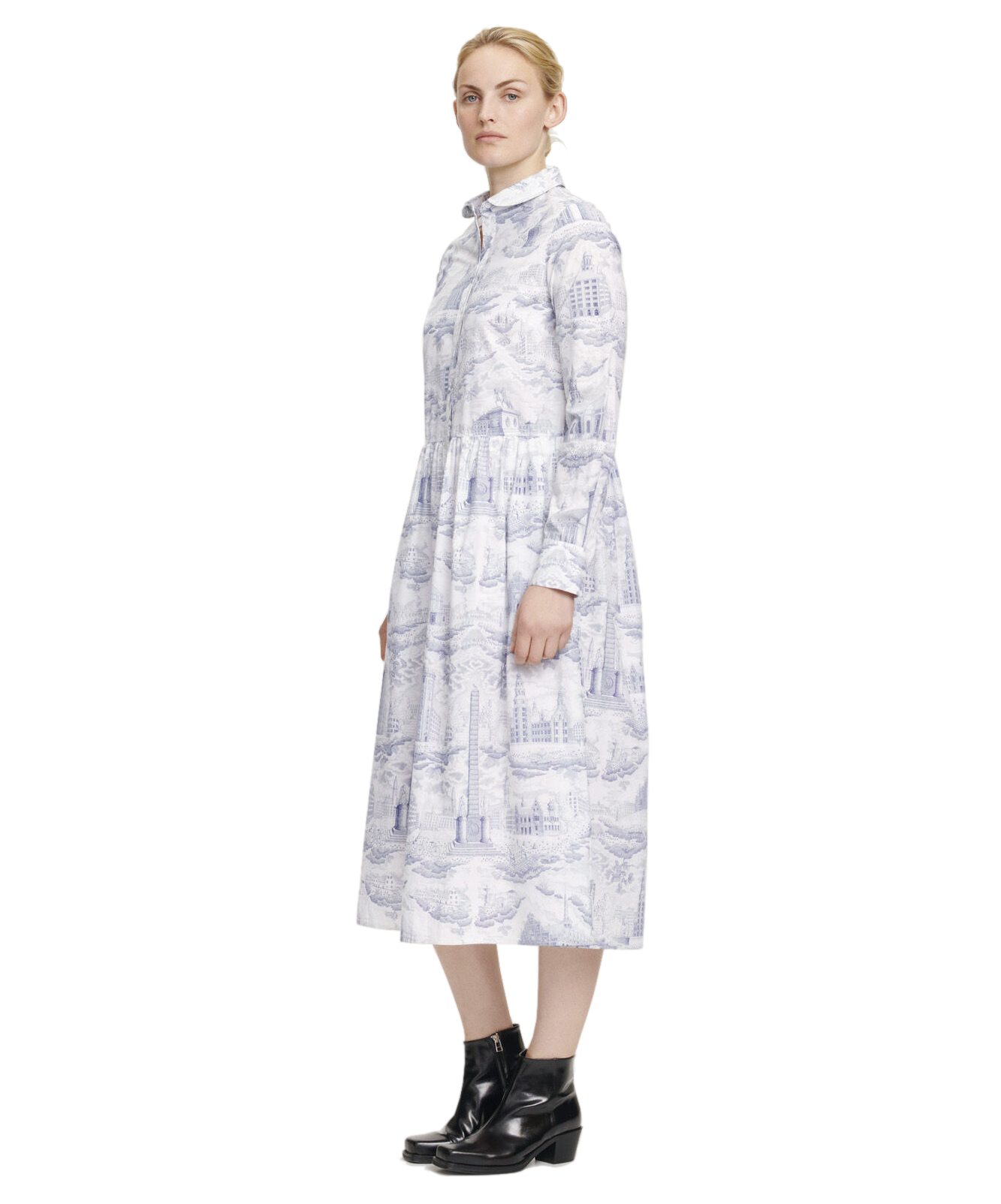 Summer is here and I enjoy very much to see the CITY OF TOWERS textile design out in the streets and in the countryside aswell. Thus the journey with this wonderful project is nearing its end for me.

In this entry I have tried to sum up the whole story in pictures in combination with the text from the press release send out by Samsøe & Samsøe.

Samsøe Samsøe transforms the antique Toile du Jouy pattern into a modern homage to Copenhagen that showcases the history and beauty of the diminutive northern city. The fabric that has come to embody French refinement and art de vivre is reimagined this season as Samsøe Samsøe shapes a visual journey through the historic landmarks of Copenhagen. Showcasing the story of the city through architecture and quintessentially Danish symbols, such as leaves from the beech and oak trees, as well as the ubiquitous bicycle and the fairy tale Little Mermaid, the City of Towers print is a celebration of Copenhagen and a tribute to the architecture and artistic craftsmanship of the little city in the North. Created in collaboration with the
Danish artist and architect Filip Juhl, the Toile de Jouy print takes inspiration from a French tapestry from the Napoleonic era. The new, hand-drawn print is the result of months of meticulous work, rendering the city’s most illustrious landmarks and national symbols on crisp cotton or drapey tencel. “The collaboration presented a
unique opportunity to emphasise and celebrate what I love about Copenhagen; its history and its beauty,” says Filip Juhl, who has used the city as motif for his detailed drawings for over a decade. Copenhagen’s spires stand out in a cityscape notably devoid of high-rise buildings. Rosenborg Palace, home to the nation’s Crown Jewels, is surrounded by the city’s walled green respite, King’s Garden. The Old Stock Exchange, one of the Copenhagen’s oldest buildings, pierces the landscape with its intertwined dragon tail spire, and The City Hall clock tower rises up above the surrounding buildings, as do the structures of the Trinitatis Complex. Juhl purposely
selected buildings that represent Copenhagen’s rich and varied architecture, spanning King Christian IV’s reign in the 17th Century to the end of the First World War in 1918. Allowing the spectator to engage directly with the city in a timeless landscape, he deliberately eschewed adding people to the print. “While the city is ultra modern, there are spaces where you are transported back in time and feel like you are in a fairy tale,” he notes. Toile de Jouy dates back to mid-18th Century, where the decorative fabric pattern was popularised by the Bavarian engraver and colourist Christophe-Philippe Oberkampf at his factory in Jouy-en-Josas, France. Here, copper-plate printing transformed sheets of fabric into complex monochrome vignettes of natural motifs, geographical scenes and mythological creatures. The
fabrics created were named “Toile de Jouy” (meaning cloth from Jouy) in reference to the town from which they came. 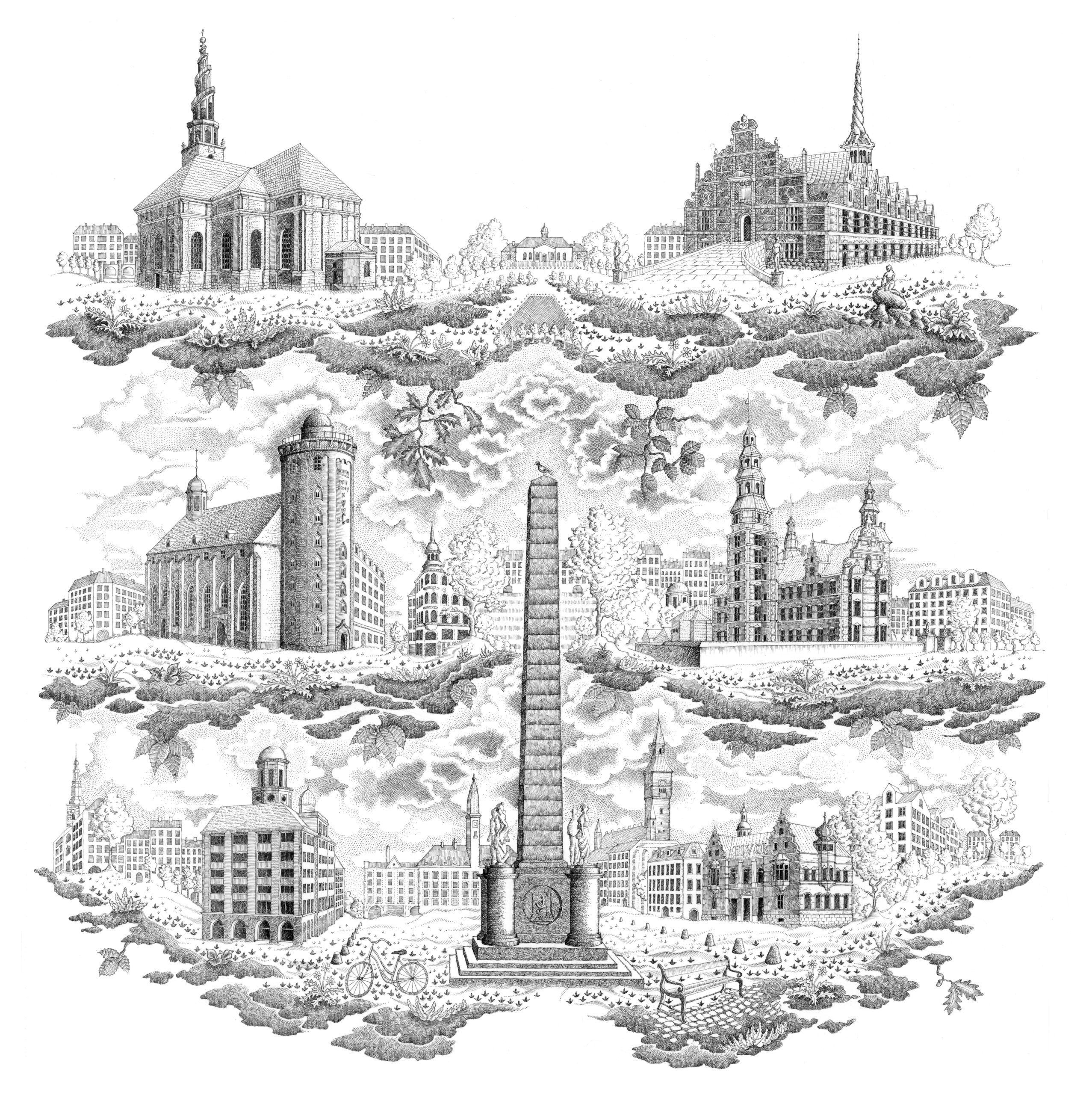 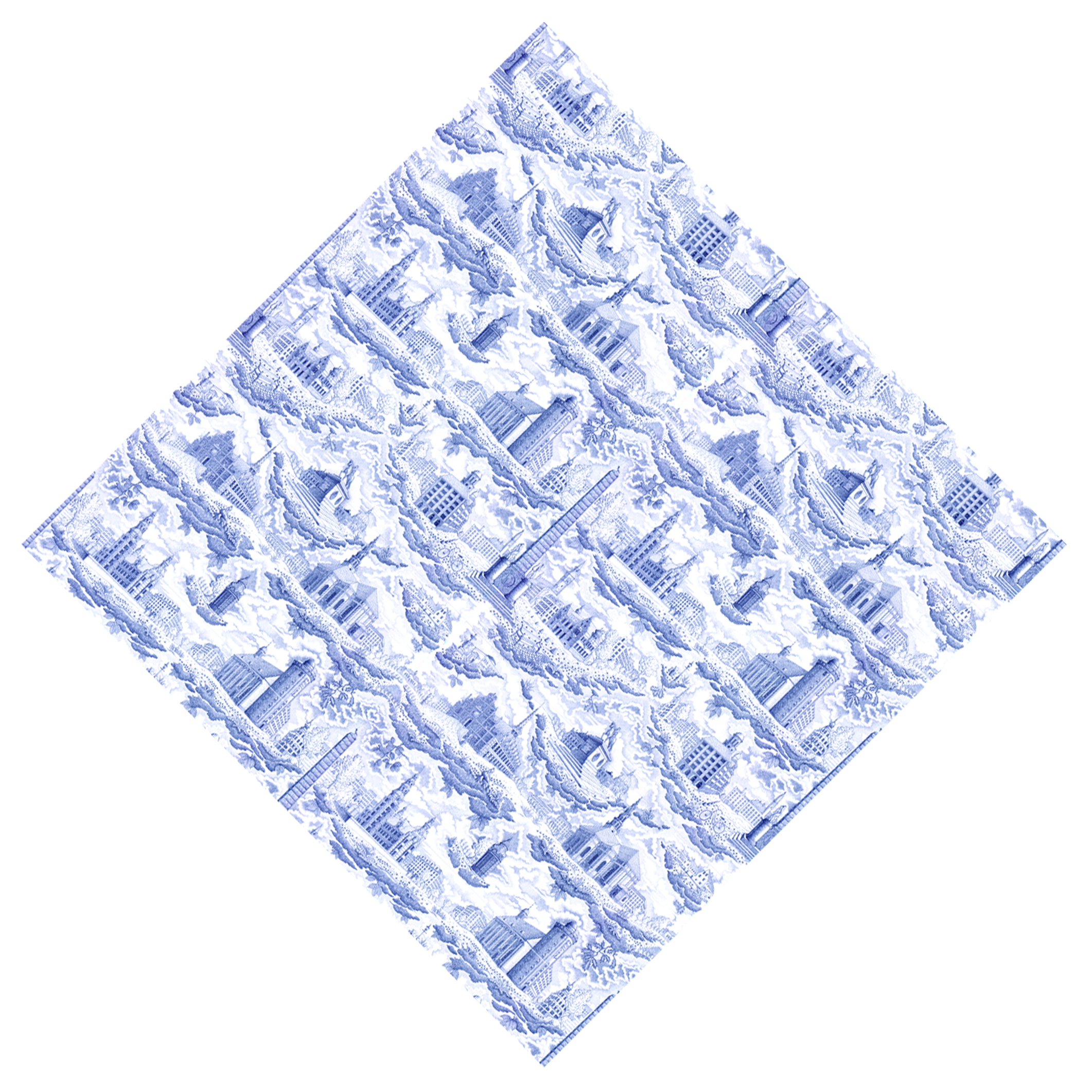 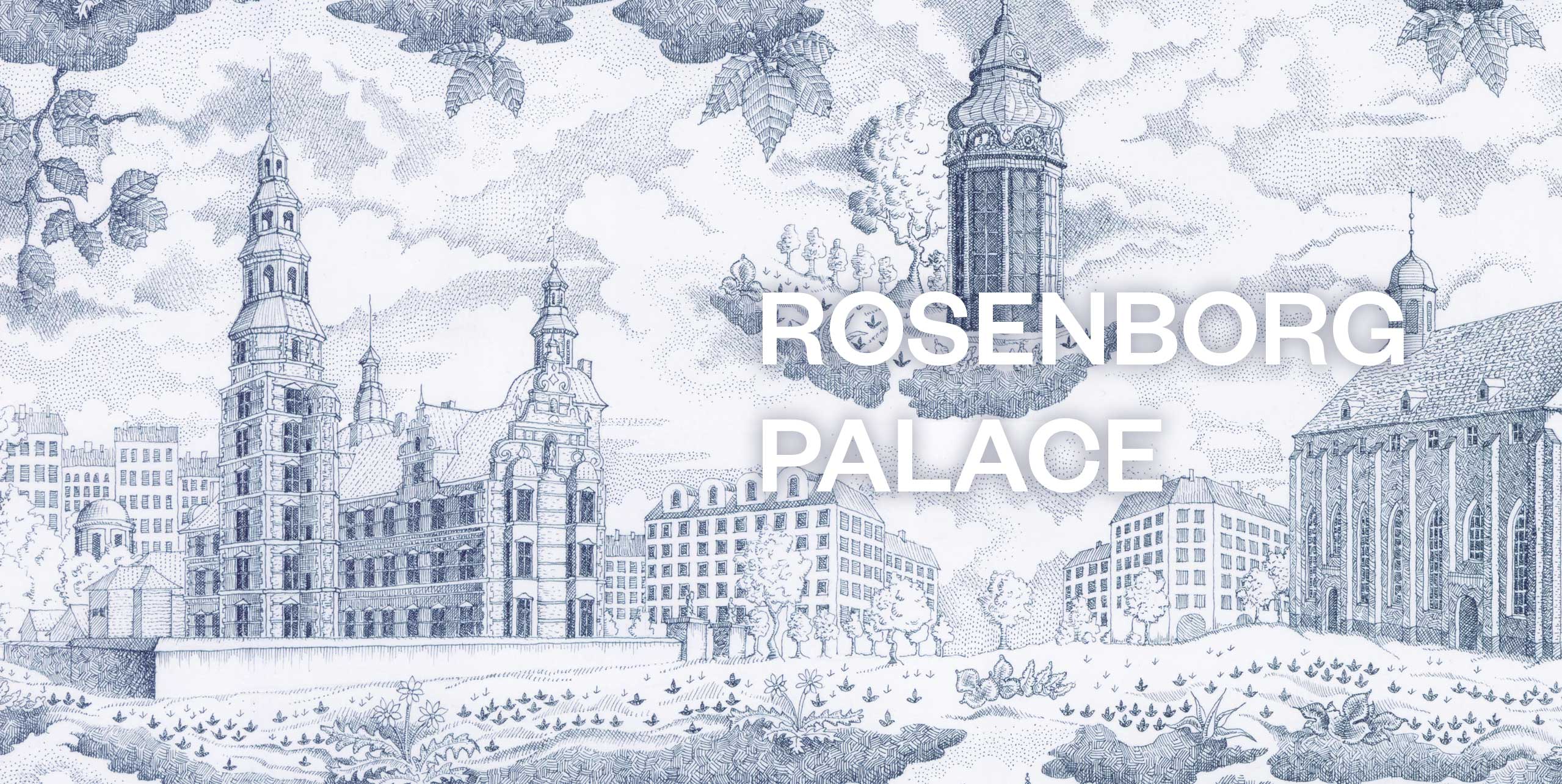 A royal retreat in the centre of Copenhagen, the 400-year-old Dutch Renaissance style castle was built for King Christian IV in 1606 and subsequently used by Danish
regents as a royal residence until around 1710.

Commissioned by King ChristianIV in 1642 to continue the research undertaken by astronomer Tycho Brahe prior to his death some years earlier, The Round Tower remains one of Europe’s oldest functioning observatories. Today the Dutch Renaissance building is a tourist attraction; its spiral walkway leads up to a restored observatory and observation deck, as well as an exhibition space. Part of the Trinitatis Complex comprising a church, university library and astronomical observatory, the Trinitatis Church was built in 1651 to serve the city’s university students and professors. Today it is a parish church.

In 1797, the 20-metre high obelisk was erected in front of Copenhagen Central Station to commemorate the peasant reforms of 1788. Marking a new beginning of freedom and liberation, the column’s base depicts four female figures that symbolise
Bravery, Civic Virtue, Fidelity and the Industrious Cultivation of Land.

Inspired by Siena’s Palazzo Pubblico and designed by the architect Martin Nyrop, Copenhagen City Hall was erected in 1892 and completed in 1905. The preceding city hall buildings were both lost in fires, in 1728 and 1795 respectively. 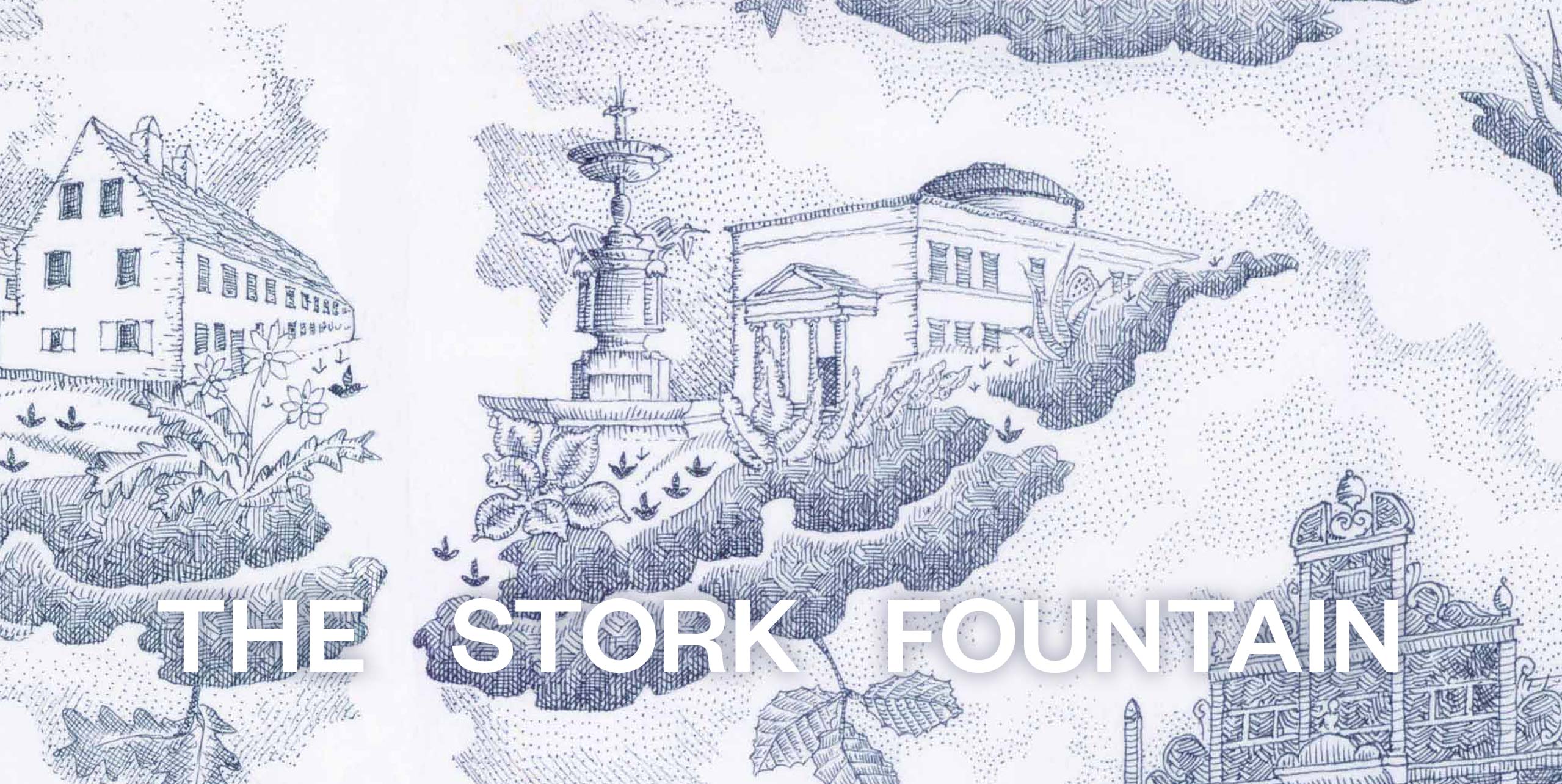 One of Scandinavia’s most renowned fountains, located at Amagertorv in central Copenhagen, the Stork Fountain was an anniversary gift to King Frederik VIII and Queen Louise on the occasion of their silver wedding anniversary in 1894. The ornate
landmark depicts three storks about to take flight. 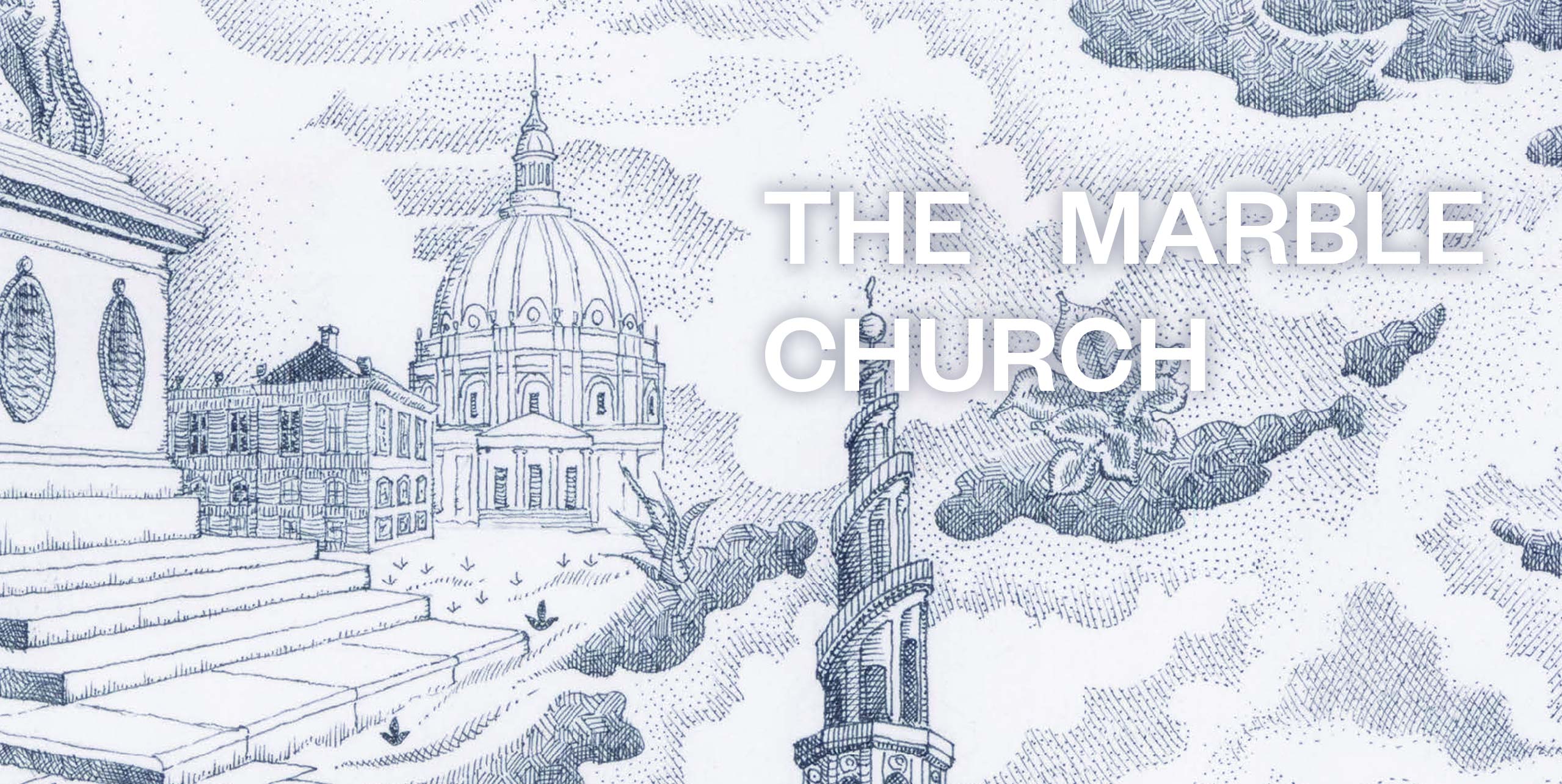 Also known as Frederik’s Church, the Rococo style building is one of the city’s most impressive churches. Featuring the largest church dome in Scandinavia, the foundation stone was laid by King Frederik V in 1749 as part of the grand plan to create a new city district, Frederiksstaden. Designed by architect Nicholai Eigtved in 1740, it took three architects to complete the building. Slow progress and a small budget left the church incomplete for almost 150 years until work resumed and was
finally completed in 1894. 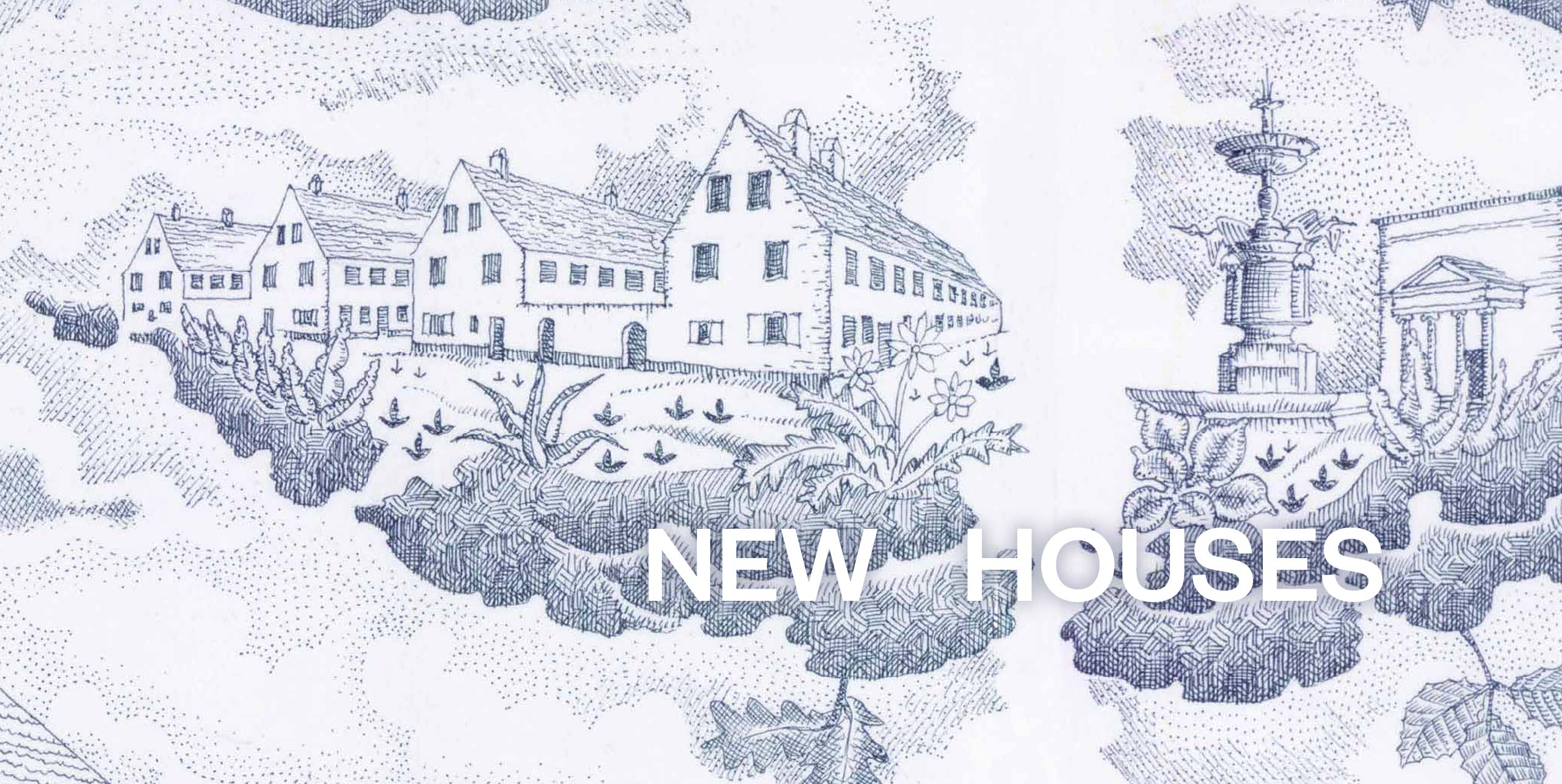 Commissioned and first built by King Christian IV in 1631 to house enlisted Royal Danish Navy personnel and their families, Nyboder is an inner-city series of historic terraced houses painted in a distinctive yellow colour. 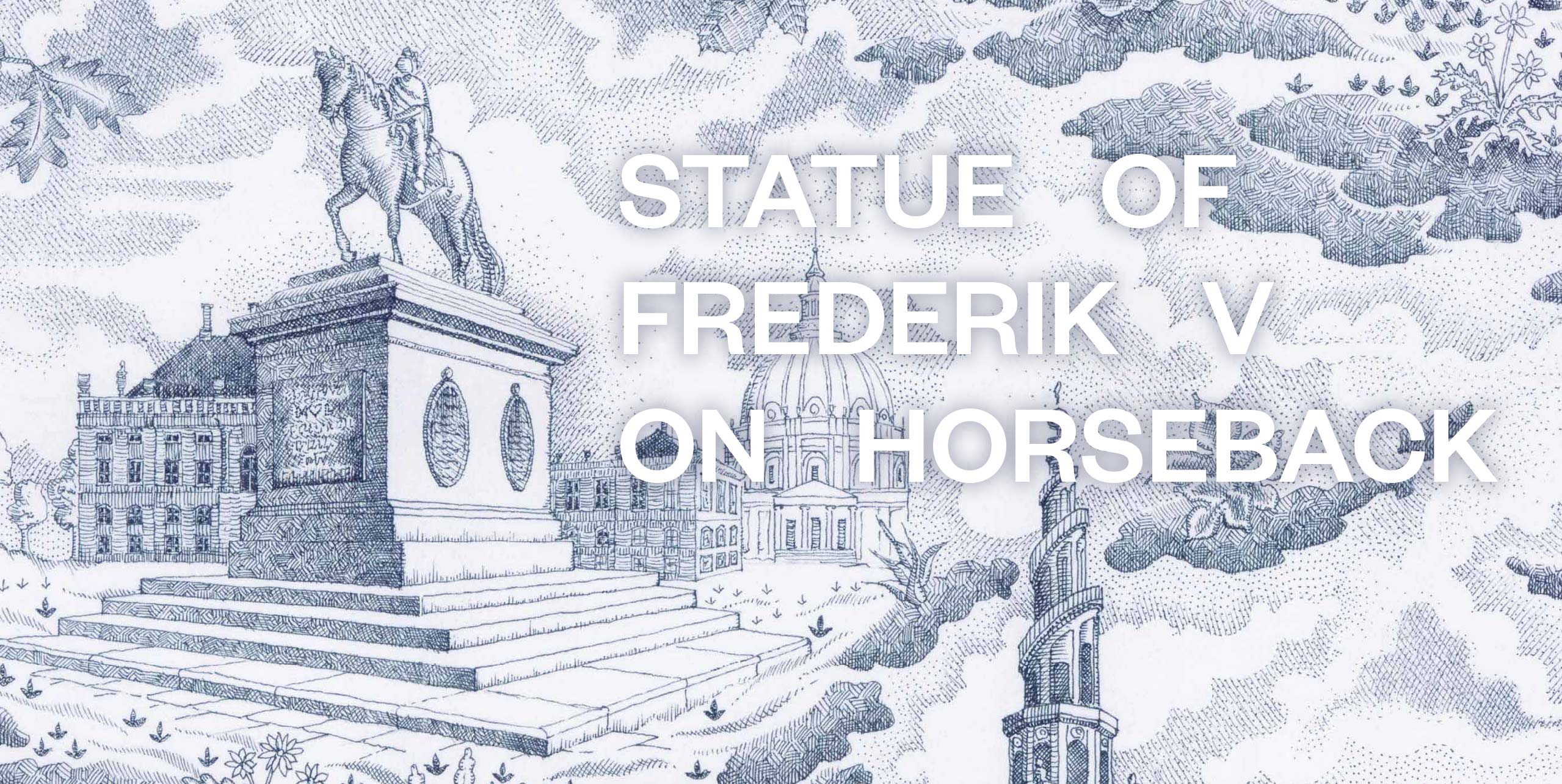 Dedicated to King Frederik V and framed by the four wings of Amalienborg Palace, the Neoclassical equestrian statue took more than 20 years to complete — although
the actual casting took just three minutes: on 2 March 1768, 300 guests were invited to watch while 18,000 kilos of molten bronze was poured into the mould. Widely regarded as one of the world’s finest equestrian statues, the King sadly died before its completion.

Built by King Christian IV between 1619 and 1640 on the hope of transforming Copenhagen into a centre of finance and trade, the Old Stock Exchange is one of Copenhagen’s oldest and most prominent buildings. The Dutch Renaissance style
structure is noted for its prominent bronze spire of four intertwined
dragon tails topped with a spear and three crowns to represent the union between Denmark, Norway and Sweden. 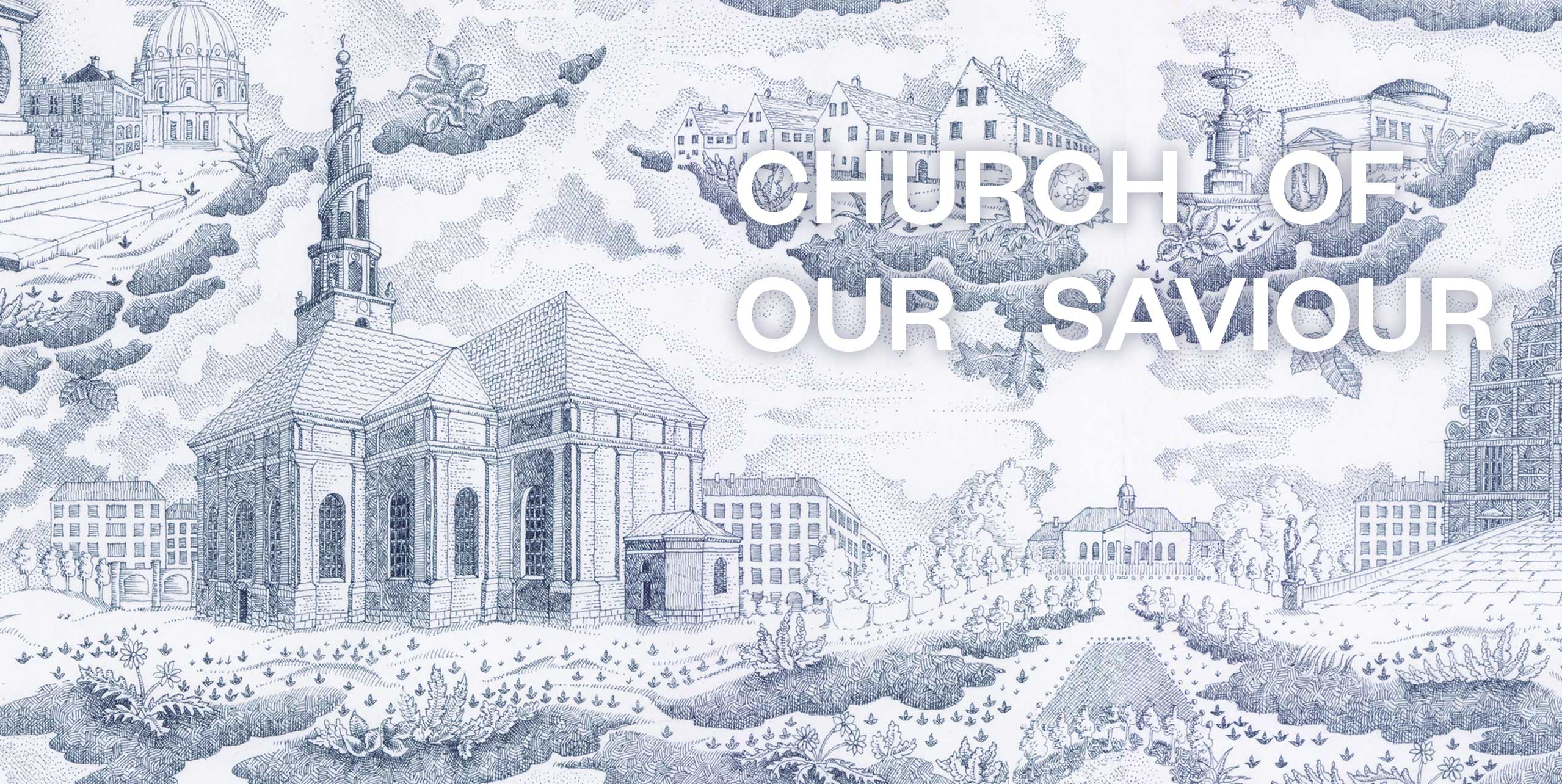 When the island district of Christianshavn needed a place of worship, the Dutch Baroque style church was built on an occluded sea bed, which made laying the foundations a lengthy process. Constructed in the 1680s and consecrated in April
1696, the serpentine steeple was first completed in 1769. Today the church is considered one of Denmark’s most famous specimens, and tourists and locals alike can climb the 400 steps to the top.